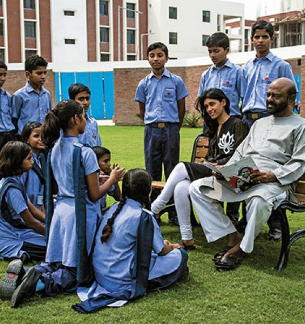 The Shiv Nadar Foundation was established in 1994 by Shiv Nadar, Founder of HCL, a US$ 10.8 billion leading global enterprise. The Foundation is committed to the creation of a more equitable, merit-based society by empowering individuals through transformational education to bridge the socio-economic divide. To that purpose the Foundation has established institutions and programs in the underdeveloped disciplinary areas in India related to rural and urban education and art.

The Shiv Nadar Foundation pursues philosophy of ‘Creative Philanthropy’. It is a powerful model which envisages creation of institutions that go beyond the lifetime of its founders and continue to impact future generations for many centuries to come. It is an approach that allows sustained institutionalized philanthropy for long-term, high impact, socio-economic transformation.

Over the last 25 years, the Shiv Nadar Foundation has striven to promote inclusive education, make basic, middle and higher education more effective and quality-oriented catering to the specific needs of the job market, enhance the focus on research and contribute to areas of global and national relevance. The aim has been to create leaders in every field from the most underprivileged sections of the society.

SHIKSHA Initiative was started in 2012 with a mission to create literate and empowered nation. The program started in two phases – Centre of Excellence (CoE) Model and Project Expansion Model.

CoE was the pilot phase which was aimed at developing and testing the programs as well as addressing the gaps. As the initial phase, it helped in monitoring the effectiveness of processes, benchmarking performance for optimum implementation and providing customized frameworks for enhancing output. In summary, Center of Excellence brings together varied Most Unexceptional practices in program development, deployment and measurement to embed the skills and knowledge required to make SHIKSHA a successful model.

CoE started in four primary government schools with four young dynamic academic experts who were entrusted with the responsibility to implement the SHIKSHA Initiative in one school each. These individuals carried the equipment including laptop, batteries, inverters and projectors on a daily basis to the schools and conducted classes using interactive digital content.

Incorporating the learnings from the pilot phase, in 2013, the number of schools were increased from four to 20 in two districts of Uttar Pradesh i.e. Gautam Buddha Nagar and Bulandshahar. Also, the digital content based on UP board curriculum for grade 1 and 2 was developed, tested and implemented in this stage. In 2014, the project expanded to 40 schools reaching out to 5000 students. During this period, testing of technology was initiated, Field Officers (teachers in open lab) were trained, and the curriculum was made ready. Focusing on its mission, SHIKSHA initiative was expanded to 300 schools in 2015 adding three more districts in UP to its implementation areas i.e. Mirzapur, Hardoi and Hathras. In 2016, SHIKSHA Initiative shifted its approach. This included consolidation of efforts across all locations and shifting the project expansion efforts to a new location – Kasmanda block in Sitapur district.

Since the advent, SHIKSHA Initiative was invited by the District Magistrates of Siddharth Nagar, Balrampur, Gonda, and several other districts to help implement the model. With this, SHIKSHA had converted to reality its mission of creating a scalable, replicable model for improving primary school education.